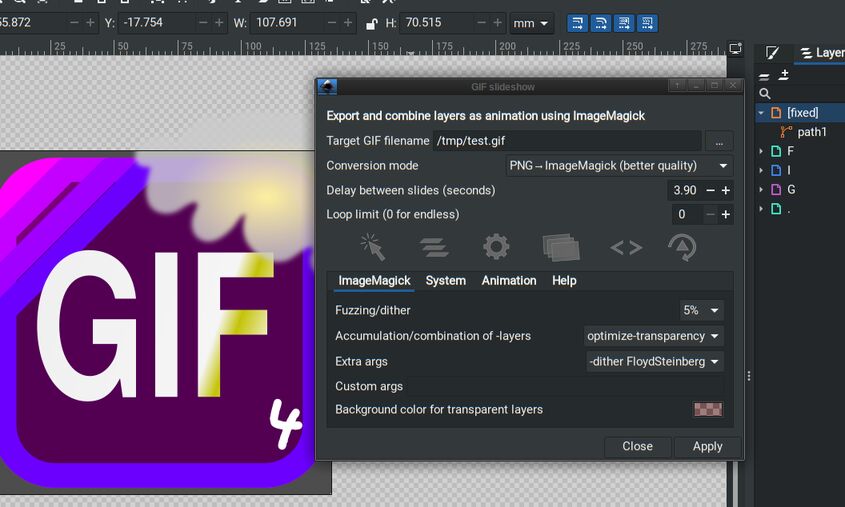 Generates a GIF slideshow from image layers ☰ (Shift+Ctrl+L). The menu option Extensions➜Export➔GIF-slideshow… iterates over layers to generate animation slides. They get merged from bottom to top. Depending on shape overlap or layer transparency, there's different usage modes:

Requires ImageMagick installed; fit for standard Linux setups. But might work with convert.exe on Windows. And alternatively there's the builtin Pillow conversion method. The options mostly map to IM flags.

Might require some experimentation, and heavily utilizing the preview option. Potential error popups become informative at the very end. Most current documentation is in the script itself.

Code was derived from Xavi's Export Layers Redux For Inkscape 1.1+ - Which might still be the better fit for more customization, post-processing via Gimp, or generating a video via ffmpeg for example.

Per default each resulting GIF slide will be comprised of exactly one layer. Except when coalesce mode is on, or if layers are labelled accordingly. In the layers ☰ (Shift+Ctrl+L) pane, you can double click any name to edit the label. Then press ENTER.

In any case, there can be multiple of them. A fixed or background layer can still be overlapped by higher ups. And you can thus clear scenes, and use multiple [background] or [fixed] foregrounds for different frame sections.

Additionally if the -layers option is set to any of "coalesce", "merge", "composite", or "*plus"; then lower-layer-visibility is active. Which means then when iterating over slides, the preceding layers get painted below. Which provides for more aggregation than the usual only-current-layer-visible. It still combines with any fixed layers.

For example, whilst assembling slide 4, layers 1 + 2 + 3 will also remain visible (even if covered).

Additionally there's the --option=xyz syntax for layer labels. It's mostly meant for changing the -delay for a frame. From v1.1+ it will automatically reset for the following slide. And can be used for other options (-colors 32).

Notably this isn't convert´s own argument syntax. Here --delay=2.5 will be mirrored as -delay 250 frameX.png for example. The allowed syntax is very restricted, doesn't permit expressions or a different -write target. Nonetheless you could use it to inject prepared image files --verbose=/tmp/frameX.png into the slide list (-verbose just happens to act as void argument there), or even paint --format=Singleword text.

There's now some support for rudimentary SVG <animate*> instructions. Which will expand a single layer into multiple subframes, each taking a slice of the original per-frame delay. Per default [animate] would interpolate 5 subframes, but [animate=25][--delay=1] or [steps=10] could expand that. (There's now a global dialog option for that default). Note that this also incurs longer generation time.

It's still largely an experiment, but works for scaling and style changes. Some caveats of course:

Don't expect this to be as exact as SVG browser display. It's just meant as basic alternative to real animation tools. (And I really can't recommend enve2d enough, even if incomplete. Enabling path transforms requires some getting used to, but the timeline interactions are quite practical.)

PNG→ImageMagick: Preconverts slides to PNG first, before having convert assemble the target GIF. The conversion is done via background Inkscape incantations, and is thus a bit slower. Usually creates the best output however.

SVG→ImageMagick: Doesn't invoke Inkscape for each slide, but lets ImageMagick convert the raw SVGs directly. Which will fail for gradient layers, and any path or font effects. It's really just suitable for solid drawings, or standard text slides. But in such cases can be faster to produce output. Additionally this is the mode where the fallback background color (for fading effects) gets applied behind partially transparent slides.

PNG→Pillow: Utilizes the PIL/Pillow module to generate GIFs instead of an external tool. It will still preconvert slides to PNG first. It doesn't recognize many of the options yet (and probably never will).
It's potentially the fastest option, though that won't matter for >20 slides. There's no dithering enabled, so might end up with more blocky graphics instead of gradients.

JavaScript-embed: Is a shallow alternative to JessyInk. Merely injects a <script> tag to loop over slides. It's kind of the same algorithm of the standard slide mode, honoring potentially fixed layers, but not the coalesce mode (only ever one layer plus fixed overlays). Any animations would run with an actual browser interpreter.

The script itself contains the config: options in a #comment, which simplifies adapting available flags. Most intestingly the present convert options can be customized. The select: line is just a string of alternatives, and could be added onto:

Afterwards, you would use pmd2inks export_gif.py > export_gif.inx to update the according Inkscape plugin XML. While in this case you could well edit that XML directly, the script extraction could be more practical for repeat changes.

However, if you do want defaults changed (for the save-as mode, which doesn't bring up the dialog), then you'll have to copy the pars.add_argument(…) section back into the *.py script.

Not sure those are gonna happen (but we have a compact dialog now):

There's now a companion tool Animate Yo, which can craft actual SVG animation (SMIL) tags. Some of which might be recognized by the tweening and export_gif subframe generation. 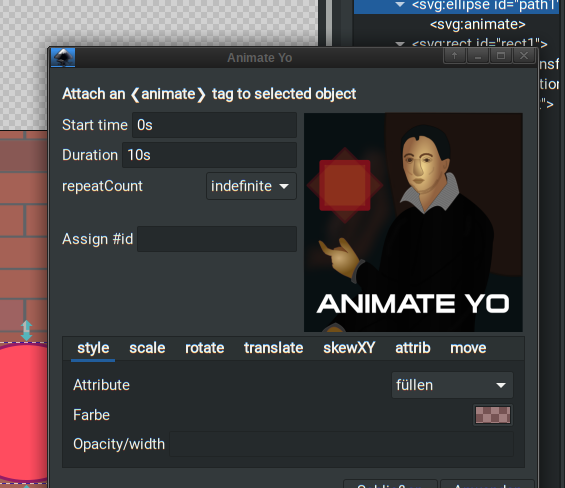 The according instructions will be visible and editable in Inkscape’s 🗔 XML editor (Ctrl+Shift+X). Where you could replace edit to="20" or the list of values="10;20;30" for example, or change other attributes like calcMode="paced" (now available in new dialog notebook).

It's sometimes practical to have both extension dialogs open atop the drawing board (where you can still select objects, change params). The DEB package bundles both extensions, btw.